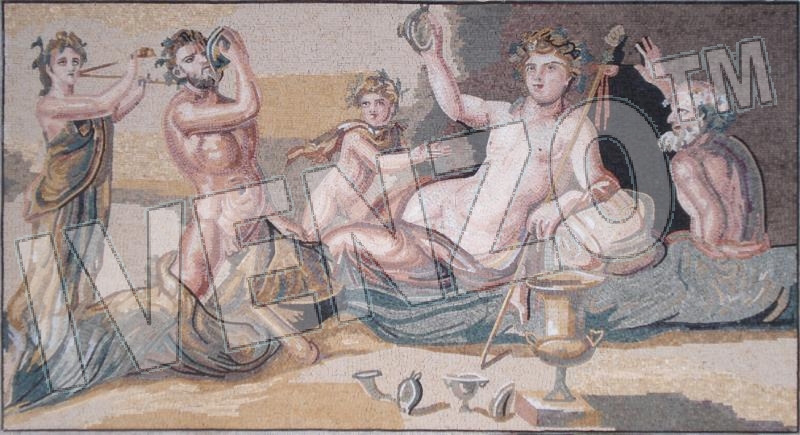 Mosaic of the Drinking Contest between Heracles and Dionysus from the "Atrium House" in Daphne, early second century AD.
In the center of the mosaic is Dionysus, light-skinned and relaxed, overturning his cup to show that he has won the contest. A Silenos with white hair and beard raises his arm in triumph (right) and an Eros-type figure (middle) indicates the winner. On the left is the mortal Heracles, ruddy-skinned and on his knees, grasping at the drapery around his legs and raising the wine cup to his lips. A young woman plays the double flute into Heracles' ear, which hardly seems helpful. In the foreground are drinking vessels including the krater for mixing wine and water, a rhyhton, and several drinking cups.
Mosaics having to do with drinking are common in dining rooms in the Roman world, and much was written about drunkenness as a state to be avoided. The sad state of the mortal Heracles in comparison to the god reminded human viewers of their limits and encouraged moderation in pleasure.
Early second century AD, Atrium House, Antioch. Worcester Art Museum
Information from Antioch: The Lost Ancient City, p. 68 and 170.