The Mosaics of Antioch

Antioch on the Orontes was an ancient city on the eastern side of the Orontes River. Continuously inhabited since then, it became the modern city of Antakya, Turkey.

Founded near the end of the 4th century BC by Seleucus I Nicator, one of Alexander the Great's generals. Antioch eventually rivaled Alexandria as the chief city of the nearer East and was a cradle of gentile Christianity. It was one of the four cities of the Syrian tetrapolis.

The new city was populated by a mix of local settlers that Athenians brought from the nearby city of Antigonia, Macedonians, and Jews (who were given full status from the beginning). The total free population of Antioch at its foundation has been estimated at between 17,000 and 25,000, not including slaves and native settlers. During the late Hellenistic period and Early Roman period, Antioch population reached its peak of over 500,000 inhabitants (estimates vary from 400,000 to 600,000) and was the third largest city in the world after Rome and Alexandria. By the 4th century, Antioch's declining population was about 200,000 according to Chrysostom, a figure which again does not include slaves.

During the 4th century, Antioch was one of the three most important cities in the eastern Roman empire (along with Alexandria and Constantinople), which led to it being recognized as the seat of one of the five early Christian patriarchates.

Between 1932 and 1939, archaeological excavations of Antioch were undertaken under the direction of the "Committee for the Excavation of Antioch and Its Vicinity," which was made up of representatives from the Louvre Museum, the Baltimore Museum of Art, the Worcester Art Museum, Princeton University, and later (1936) also the Fogg Art Museum at Harvard University and its affiliate Dumbarton Oaks.

A great accomplishment of the expedition was the discovery of high-quality Roman mosaics from villas and baths in Antioch, Daphne and Selecia. One mosaic includes a border that depicts a walk from Antioch to Daphne, showing many ancient buildings along the way. The mosaics are now displayed in the Hatay Archaeological Museum in Antakya and in the museums of the sponsoring institutions. 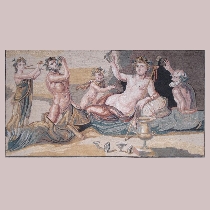