The Mosaics of Sentinum

Sentinum was an ancient town of Italy, lying a kilometre to the east of the modern town of Sassoferrato, in the low ground; its ruins were identified in 1890.

The foundations of the city walls are preserved, and city gates a road, cisterns and remains of houses have been discovered, including several mosaic pavements and inscriptions of the latter half of the third century A.D., including three important tabulae patronatus, recording legal ratifications of civic appointments of official patrons.

In the neighborhood, the Battle of Sentinum took place, in which the Romans defeated the combined forces of the Samnites and Gauls in 295 BC. It sided with Anthony but was taken and destroyed in 41 BC by Salvidienus Rufus leading troops of Octavian. It was replanned under a regular urbanisation and continued to exist under the Empire, as a municipium, never (as some wrongly suppose) a colonia. From a thermae of the earliest Empire a large figured mosaic pavement is preserved in the Museo Nazionale delle Marche. A second-century colored mosaic of Mithra-Sol is conserved in the Glyptothek, Munich; Mithraic bas-relief of animals representing the stages of the initiate's progress were reused in the Church of Santa Croce, and Mithraic inscriptions are recorded.

Civic life at Sentinum seems to have collapsed at the time of the invasion of Alaric I and not to have been renewed. 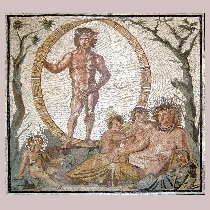